Adapting your marketing plan for the bear market of 2022

The 2020s will be remembered as the decade of change. I know we’re only three years into this decade, but they’re off to a strong start. The first two years were years of a global pandemic that changed our values, how we consume, and work. And evidently, years that changed the markets (for better or worse).

After more than a decade of financial growth, it’s become clear that the market is shifting. It’s everywhere – interest rates are going up and inflation is creeping – this will have a HUGE impact on B2B.

It’s always a good idea to update your marketing plan, but now it’s a must.

Market downturn: how does it affect B2B SaaS?

I’m not going to explain how we got here, but here’s a video that explains what’s happening now and what to expect.

Bottom line, we’re seeing a decline in the stock market. As of the beginning of 2022, the S&P 500 had declined over 20%. That fall is mitigated by Apple, whose market capitalization is just over 7% of what the S&P 500 is worth. While other companies, like Salesforce, have suffered from over 40% drops in their stock price, Apple managed to maintain its value with only a 12% decline.

This has a couple of effects:

There’s a slowdown in company growth all over the world, and growth rates are even lower than last year, especially for companies under 12M ARR. ChartMogul found that only companies with MRR > $1M maintained increased YoY growth rates. 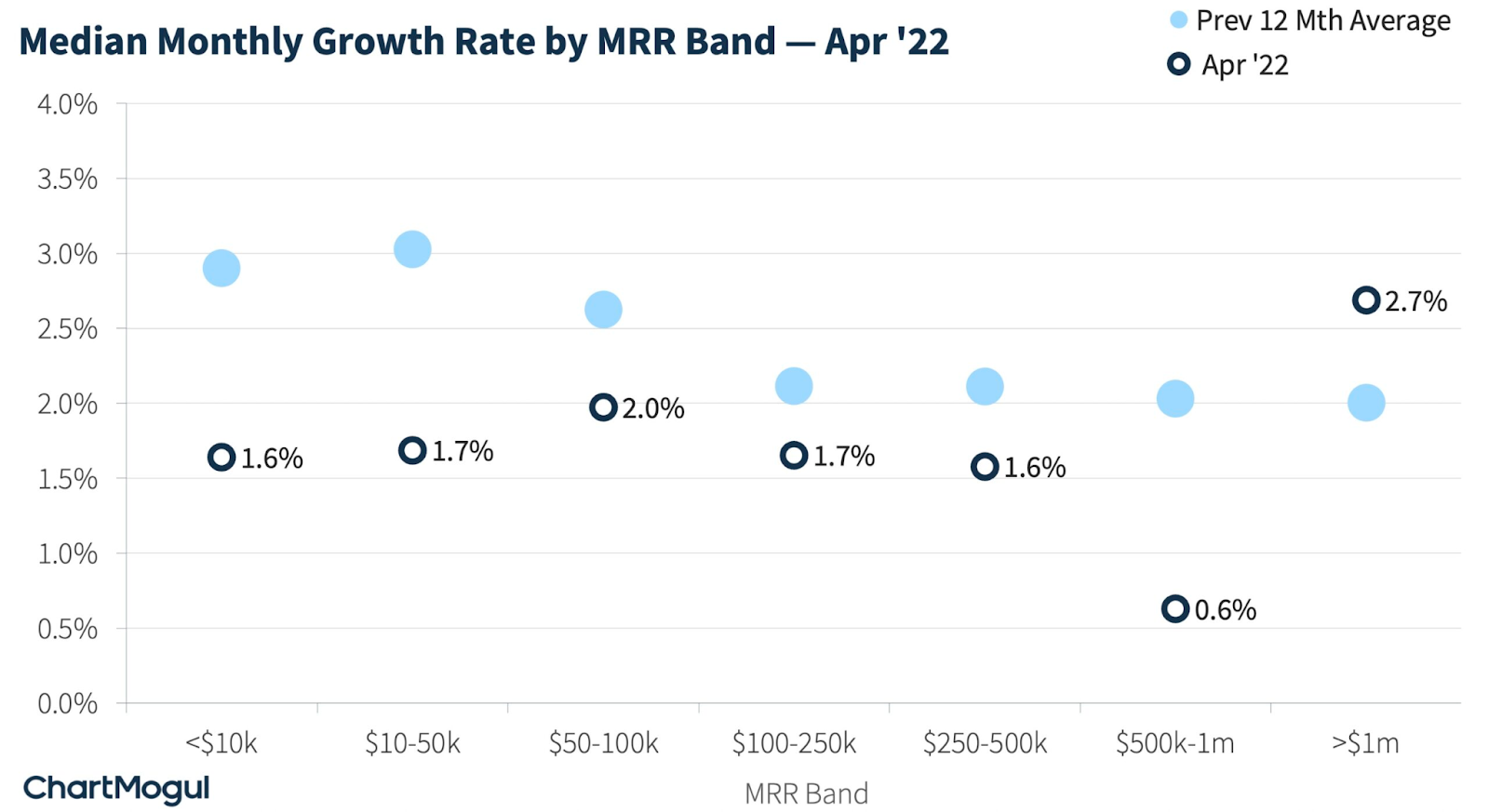 Companies are buying less software, they have less money to spend, and “growth at any cost” is no longer a thing.

Looking for a new job?

This economy affects everyone from publicly traded companies like Tesla to IPO candidates such as Carbon Health and everything in between including unicorns, big and small startups, B2B, B2C, or any other combination of letters.

My LinkedIn feed is starting to show more and more posts of people who were laid off. Increasingly, companies are realizing they need to make every expense matter, and spend money on the things that will guarantee stability and growth – this means changes in budget and workforce.

Taking the two first examples together, you can see that companies have to cut expenses, and a great (being cynical here, but let’s face facts) place to do that is in marketing. Budget changes are already happening.

LinkedIn CPM changes are an indicator. As you probably know, CPM is constantly growing, but something’s different now. As a result of companies limiting their ad spending, or shifting it to demand capture channels (like Google Ads), for the first time in history, CPM on social media is declining.

Myles Madden from Refine Labs, summed this up perfectly: 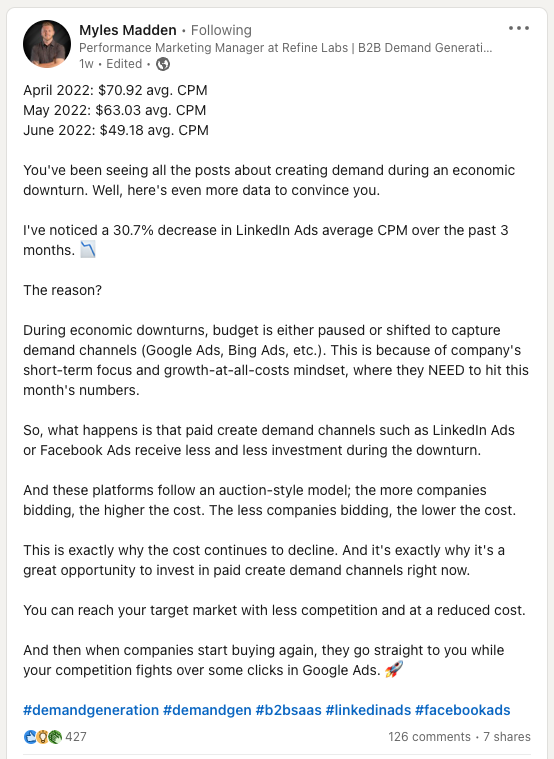 Adapt your marketing plan to the bear market

The changes we see in CPM costs are just an indicator of something bigger. You might have already had to change your marketing strategy and budget, you might have to in the near future, or you might want to leverage the market changes to scale your growth.

Either way, here are some actions you can take right now to adapt your marketing plan to the market downturn.

Focus your efforts on channels that are proven to drive revenue.

The following was written in Marketo’s blog 14 years ago, during the 2008 recession, but it could have been written today:

“Branding and other forms of push marketing drop in a slowdown, while direct marketing tends to rise. When budgets are cut, the channels with the least ability to measure marketing ROI are cut especially hard as companies shift spending to more measurable channels. Investment bank Cowen and Company looked at the last six recessions since 1950 and found that spending on direct marketing actually grew during six recessions.”

14 years later, we live in a world that celebrates measurements and data-driven decisions. We marketers measured everything, even things that had little or no correlation with revenue or business impact.

It is easy to overlook this during times of growth (mainly because it is so hard to do), but it is important to understand how budget changes will affect the companies’ bottom line.

For example, It would be a great idea to pause channels that drive a ton of MQLs but have yet to prove they have the ability to drive customers and revenue.

The example above illustrates why it is important to optimize your budget based on revenue metrics and opportunity/closed won funnel stages.

By doing this, you can make sure whatever you cut won’t have a major impact on income. To me, reducing ad spend while maintaining volume and increasing efficiency is the way to go.

In uncertain times, the best thing you can do is to give certainty. The latest point discussed revenue driving channels as an optimization technique. Now, we’ll focus on optimization through decreasing sales cycle velocity.

What is a better investment?

Well, it depends on how long it takes to get this ROI. What if the first investment took 12 months to even become ROI positive, while the second became ROI positive in just 2 months?

Channels with a short time to value can be an opportunity for compounding returns. You can reinvest the returns, creating a new way of scaling your budget – one that’s based on your results.

By reducing your sales cycle from 8 to 4 months, you can prove marketing efficiency in half the time. You can double your revenue if you reinvest this money. Also, this might help you get more buy-in when trying to increase your marketing budget with finance or management.

Reduce the overall sales cycle length by investing in channels and campaigns that decrease velocity and accelerate your pipeline.

Invest in channels that others can’t

In the past 100 years, studies show that during recessions, companies that do not reduce their marketing budgets actually get more sales during and after the market rebounds.

If you have budget stability and strong unit economics, now might be the perfect time to double down where others can’t.

Create demand instead of capturing it

Marketers will maximize new customer acquisition to demonstrate their value to management. Typically, this will involve focusing on bottom-of-the-funnel initiatives to help move prospects further down the funnel.

This might seem counterintuitive, but I recommend focusing on creating demand. Although you may not be able to show results immediately, when your competitors wake up from their demand capturing sprints, you’ll have high intent prospects knocking on your door.

Utilize awareness campaigns, content marketing, and organic channels as part of your marketing plan to create demand. If you’re able to show how these channels relate to your growth strategy, and over time, drive revenue, it will be way cheaper to generate demand now than it was just a few months ago.

Is there a channel you haven’t tried because it’s too expensive? Maybe you wanted to sponsor a podcast, but all the slots were taken. With companies changing their budgets and plans, now is a great time to experiment where you never could.

Costs are going down, including those for expensive channels. Think of it like a discounted trial period for promoting on these channels. If you have the buy in, now is the time to try out new channels, and who knows, maybe you’ll find those secret growth levers you’ve always dreamed of.

Markets are going to change a lot in the coming months and maybe years.

Your marketing strategy and budget will be affected by it.

When you’re facing this kind of change, try to make the most of it.

Transform your marketing plan into a powerful revenue driving machine.

Marketing has been and always will be a major part of any company, without it there is no growth, or in Henry Fords’ words:

Ready to see it in action?